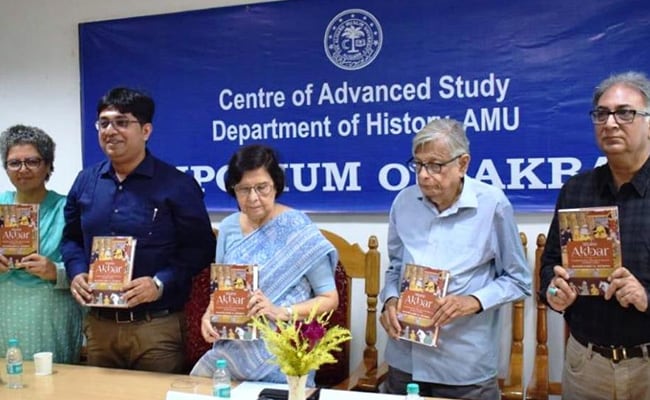 ALIGARH: The Centre of Advanced Study (CAS), Department of History, Aligarh Muslim University (AMU) observed the 477th birth anniversary of Mughal emperor Akbar with a symposium elaborating the Mughal as the precursor to the secular values of modern day India, an official release from the varsity said.

During a technical session of the symposium chaired by eminent historian of ancient and medieval India, Professor Emeritus Irfan Habib and renowned writer and historian Ms Rana Safvi, Prof Shireen Moosvi pointed out that the first prime minister of India, Pandit Jawaharlal Nehru in his book, ‘Glimpses of World History’ applauded Akbar for choosing reason over intolerance.

“Akbar’s ideas relating to coexistence and mutual tolerance of each other’s faith and recognition of talents have to be seen as part of a rich legacy he left behind,” she said.

Prof Moosvi emphasised Akbar created an environment of knowledge building and intellectual engagement in participatory learning and works like Urfi’s poetry produced during Akbar’s time are reflective of religious tolerance during his administration.

“Akbar supervised translations of Singhasan Battisi, Atharva Veda, Mahabharata, Harivamsa and other scriptures into Persian,” said Prof Moosvi adding that Sulh-I-Kul of Akbar, was a result of genuine considerations to suit a multi-religious country like India.

She spoke on how Abul Fazl referred to the idea of the nation, where he identified Akbar with India and the Proto Nationalism based on religious conciliation practiced by Akbar, said the release.

“Akbar travelled incognito from Mathura to Agra to realise that it is not justified to tax a person on pilgrimage. On his return, Akbar abolished the Pilgrim tax,” said Prof Moosvi.