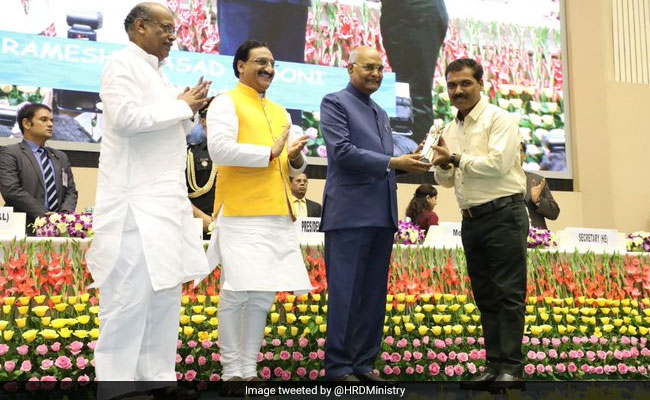 Teachers selected from across the country received the award today.

Teachers from Punjab, Haryana, Himachal Pradesh, Sikkim, Rajasthan and Jharkhand received the prestigious awards for their innovation and making their classes interesting. Officials said that this is for the first time that a teacher from an army school, which is governed by the Defence Ministry, has also been included to the list of the award winners.

The prestigious award carries a silver medal, certificate and Rs. 50,000 as award money.

Be it adopting new teaching techniques, raising funds for the school infrastructure or establishing laboratories in schools, the contribution of these teachers has been instrumental in shaping the future of the students who are under their aegis now.

Gujarat’s Kanchan Khodabhai Pandya, Bency Joy from Nicobar Island use engaging techniques to teach their students which is much akin to Ramesh Prasad Badoni’s teaching technique in Uttarakhand. Likewise M. Mansoor Ali’s unique teaching method has made students overcome the fear of the social science subject. Amol Subhash Bagul, a primary teacher from Maharashtra with NASA Kids Club he helps students to connect with the outer world.

Mathematics teacher from Nagaland, Satyen Kumar Roy, the only Mathematics teacher among the awardees, uses audio-visual teaching methodology in classroom. He has also introduced weekly group discussions and Spell Bee competition in his school.

Remya Parameshwar Iyer, PGT Biotechnology at KV KHanapara, Guwahati accessed government grant to set up a laboratory in her school to impart technical knowledge which helps her students have hands-on experience of scientific experiments.

She is among the two teachers from Kendriya Vidyalaya Sangathan to have received the National Teachers Award. Karnataka’s Iyer Revathy Rajaram, a Hindi teacher, also received the award this year. She teaches Hindi through various outdoor activities.

Apart from core subjects, there are many teachers who have felt the need to engage in extra co-curricular activities like Pune’s Radhika Dalve, Bihar’s Pappu Harijan, Gurnam Singh from Kathua, Anandkumar Babubhai Khalasi from Gujarat and Meghalaya’s Bakordar Wanlang Bannett.

There are many teachers, who have not only focused on imparting the best education to students but were also concerned about the dropping enrolments. Efforts of such teachers have helped decrease school dropouts to a large extent.

Take the example of Science Teacher Amarjit Singh from Punjab. He has contributed in making smart classrooms in many schools. His initiative has resulted in decrease in the school dropout rates.

Assam’s Archana Barua, Tamil Nadu’s R Selvakannan, Jharkhand’s Sandhya Pradhan, Kerala’s Mahesh Kumar M and Bhilwara’s Kalpana Sharma are the crusaders who have put lots of efforts in making schools more interactive than before and have helped improve the enrolment.

Mutum Tombimacha Singh, a primary teacher from Manipur, has put in lots of effort to enhance enrolment in schools through community support and motivates students with special needs for to actively participate in sports and extra co-curricular activities. “My only job is to bring students to school,” the joyful teacher says.

Vijayawada teacher Battu Suresh Kumar has extended and modernized the school infrastructure. He has installed solar power in school, modernized girl’s toilets with vending machine for sanitary napkin and has created smart classrooms.

Rewari’s Rajesh Kumar, an ardent Gandhi follower, has developed innovative and activity based methods to teach Hindi to his students.

Kodagu’s Suresh Marakala, left police job to work as a teacher. He has enhanced varied livelihood skills among students.

The Human Resource Development (HRD) ministry had invited nominations for the prestigious awards between May 6 and June 25, from which the teachers were selected on the basis of a three-tier process.

The teachers were first required to nominate themselves online, following which the district, state and the national level committees selected them.