The tart is still warm from the oven, and the pastry is crisp, baked to golden brown perfection. As I pick it up, the custard centre wobbles ever so slightly. One bite and I can understand why this, of all the pastéis de nata in Portugal, is the one for which people queue up every day.

I’m at Antiga Confeitaria de Belém in southwest Lisbon, which has been making custard tarts since 1837. In the 19th century, the space was a sugarcane refinery with a small shop attached. Meanwhile, at the next-door Jerónimos Monastery, the monks used egg whites to starch their laundry, and made delectable custard tarts with the leftover yolks. With the liberal revolution of 1820, all monasteries were shut down and the monks were forced to leave. Some of them started selling the tarts at the shop, and they quickly became known as pastéis de belém (the only place that can use this name; elsewhere in Portugal they are called pastéis de nata, singular pastel). “In the beginning of the 20th century, our family took over the shop and the monks’ secret recipe has been with us ever since,” says Miguel Clarinha, the manager and the fourth-generation co-owner of this family business. He gives me a behind-the-scenes tour of the factory. The custard and dough are made using the 200-year-old secret recipe, which is known only to the family and to the three chefs who actually make them. Obviously, I’m steered away from the door marked “segredo” (secret) to a spotless room where a group of women is rolling out the prepared dough, cutting it into pieces, and pressing it into small tart moulds. Trays full of moulds go into the next room where the warm custard is piped into them. “The tarts are then baked for 20 minutes at 400°C, to cook the dough without burning the custard,” explains Clarinha. They are slightly cooled, and “de-moulded” before being sent to the hungry customers waiting outside. “We make 20,000 of these tarts every day, and both the locals and tourists line up for them,” Clarinha says proudly. 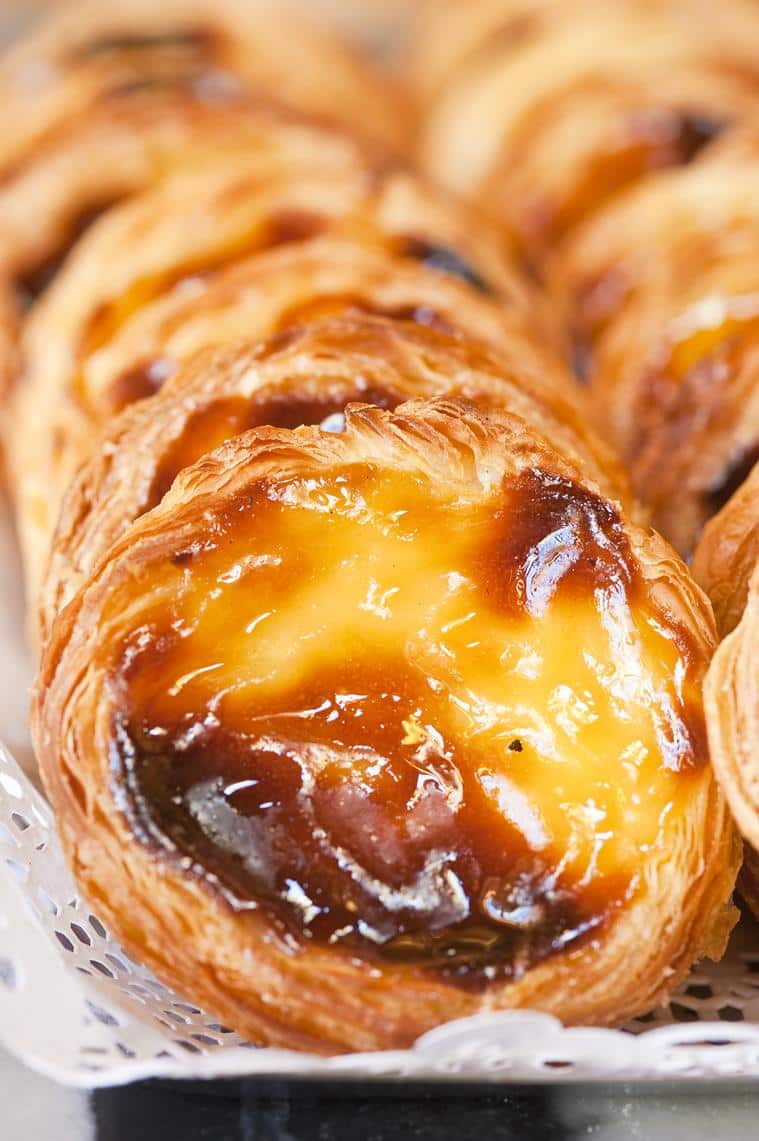 The pastéis may be the most famous Portuguese dessert, but it’s by no means the only one. The number of incarnations of sugar, eggs, and flour in Portugal is astonishing. There is a pastelaria (pastry shop that doubles up as a café) in every neighbourhood where locals socialise over coffee and pastry. As I travel the length of the country, stopping by in big cities and small towns, I find that every place has a sweet specialty all its own.

Aveiro is known as the Venice of Portugal, a city of canals crisscrossed by humpbacked bridges and flanked by Art Nouveau buildings, with colourful moliceiro boats gently plying the waters. Here, I encounter the ovos moles de Aveiro — moulded sweets with an egg and sugar filling encased in a delicate wafer shell. I visit Casa dos Ovos Moles, which has been making these sweets since 1882. Legend has it that a nun at the nearby Convent of Jesus had been ordered to fast by her Mother Superior. Unable to contain her hunger, she used the ingredients at hand — eggs and sugar — to make a sweet mixture, which she wrapped inside the dough used to produce the hosts for Catholic Masses, and, thus, was born Aveiro’s claim to fame.

In 1882, Odilia dos Anjos Soares learnt the recipe from a nun at the convent, and then founded the brand Maria da Apresentaçao da Cruz. Since then, the ovos moles recipe has been passed down the family. At Casa dos Ovos Moles, the living tradition carries on true to the original recipe, where the egg yolks, sugar, and water are cooked in a copper pot over wooden logs, and constantly stirred at a specific temperature. The outer casing is thin wheat dough spread in nautical themed moulds — fish, clams, seashells, barrels, conches etc. The egg mixture is filled in the moulds and pressed to create the sweets. The shapes are trimmed with scissors and then dipped in thin sugar syrup to give the sweets a light sheen. I bite into a fish-shaped sweet — the crisp wafer cover is a contrast to the soft, golden-yellow filling, and the overall effect is utterly delicious. I devour a clam and a seashell in quick succession, and only the thought of calories stops me from reaching for a barrel-shaped sweet. In the centre of Portugal, I visit the Alcobaça Monastery, the first Gothic building in Portugal. The church holds the exquisitely carved marble tombs of the star-crossed lovers, King Pedro I and his mistress Inês de Castro, who was assassinated on the order of Pedro’s father King Afonso IV. At Pastelaria Alcôa, opposite the monastery, I stare goggle-eyed at the stupendous pastry display, and I cannot help but try the homage to Pedro & Inês. Diario de Inês is another egg-and-sugar confection encased in a filo pastry that is as thin as paper; it is delicious no doubt, but I find segredo de Don Pedro more interesting — a mixture of apple, pine nuts, oats, and raisins, wrapped in thin pastry. Alcôa’s best-selling pastry is cornucôpia, a deep-fried pastry cone stuffed with egg candy, but I have already had my sugar fix for the day.

In Coimbra, the medieval capital of Portugal, I drop in at the O Afonso bakery. Here, I encounter my second-favourite Portuguese pastry (nothing beats the pastéis de belém). Queijada de tentúgal is a type of cheesecake — thin pastry case filled with a mixture of cottage cheese, flour, sugar, and eggs, and baked to a burnished brown. After the tooth-achingly sweet pastries of Portugal, the queijada’s tiniest hint of the savoury (from the cheese) comes as a welcome change. Further north in the fishing village of Póvoa de Varzim, I try poveirinhos at Pastelaria Riba-mar; these are similar to the pastéis de nata but topped with a layer of sugar frosting. Another northern sweet is rabanada à poveira — a cross between French toast and doughnut; it’s made from stale bread that is deep-fried and doused with powdered sugar. At Tavi Confeitaria, one of Porto’s oldest bakeries, I learn about the traditional Christmas cake called bolo rei, a rich cake with raisins, nuts, and caramelised fruits, liberally dusted with powdered sugar, a cake so famous that the Portuenses queue up outside Tavi before Christmas Day.

I return to Lisbon to catch my flight home, but not before making another trip to Antiga Confeitaria de Belém. I order two pastéis (hey, it’s my last chance!), and a coffee, and settle down in the café whose walls are lined with azulejos (typical blue-and-white patterned Portuguese tiles). The warm tart melts in my mouth, and with every bite I give a silent vote of thanks to the inventive monks. I feel one step closer to heaven, but that’s probably because of all the artery-clogging eggs-and-sugar concoctions I have been scarfing.