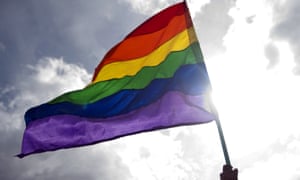 “The idea is to show children that there are different ways to love and live,” says Markus Ulrich, of the German LGBT rights group Lesben und Schwulenverband (LSVD). The issue is brought in on a day-to-day basis. “For example, in maths, a teacher could set a question that includes a gay family,” says Ulrich. “Or in English when they study Romeo and Juliet, they could ask about other types of relationships that are sometimes disapproved of.”

Germany’s 16 states set their own curriculum, and Hesse is the latest to say teachers must cover LGBT acceptance in schools, following Berlin and Brandenburg, which led the way. But whenever it’s introduced, “it’s always the same, it always goes with protests,” says Ulrich.

So, what are teachers actually teaching? Guido Mayus, an openly gay biology teacher in Potsdam, a city close to Berlin, teaches sexual and gender diversity during sex education and biology classes.

“I cover the different ways to live and the difference between sex and gender,” he says. “And we discover that a lot of sexism is based on stereotypes.”

Ahead of sex education lessons, Mayus asks his class for anonymous questions. “The questions are really simple, which shows they are missing a lot of knowledge,” he says. Past questions include, “how do I know if I am gay or a lesbian?” and “how do you come out?”

To get the children to think about gender differences, Mayus asks what advantages girls and boys have over each other (according to one class, girls’ have the advantage of being able to cry when they want, while boys can wash their short hair quickly). The class then talk about how gender is constructed. “There are a lot of old-fashioned things in their minds, because we are training them to think boys are athletic and strong and girls aren’t,” he says.

Mayus also talks about sexual diversity in his biology classes. Every year at an LGBT march in Berlin he picks up balloons that say “cool, my teacher is gay” on them to use in school. Then, when he is teaching the volume of the lungs, he asks the children to blow the balloons up to demonstrate and gets a laugh when they realise what’s written on them.

Mayus says the children enjoy learning about sex and diversity. “They’ve never talked about it before, so we make it fun and we laugh a lot,” he says.

But not all teachers are comfortable bringing the subject up. And school leaders, along with the German Education Union (GEW), are calling for better training.

Mareike Klauenflügel, a teacher in Frankfurt and speaker for the GEW group of LGBT teachers, says some teachers lack the confidence to talk about sex and diversity. Others feel they don’t have the time, already facing pressures created by the refugee crisis. “You have to talk to your colleagues, share material and coordinate,” she says. “Typically the head is responsible for making sure it’s enacted in schools. And some do, but others ignore it.”

The issue needs to be included in teacher training courses, Klauenflügel says. “There needs to be guidelines from the German Ministry of Education and they need to offer training that covers all states.” That way, teachers can feel more comfortable talking about the subject.

School leaders may also be put off by the possibility of parent complaints. Keeping parents informed from the beginning helps to keep them on side, says Regine Wlassitschau, from Pro Familia, the leading association on sexuality, partnership and family planning in Germany. “It’s important to involve parents in sex education,” she says. “This means they can express their concerns.” Ulrich also points out that school heads can make it clear that acceptance of diversity is part of the school policy, by having it included in school rules or on their website.

Young volunteers can also help bring the subject up. Lukas Chinczewski, 22, a medical student at Heidelberg University, coordinates sex education programmeSafety in Love, where student volunteers talk about all aspects of sex education in schools – and they make sure acceptance of diversity is included. “In one game we show photos of celebrities who are openly gay or heterosexual and ask what kind of sexual orientation the class think they have. Often they say ‘oh yeah, he looks really gay’, or not. So then we discuss stereotypes.”